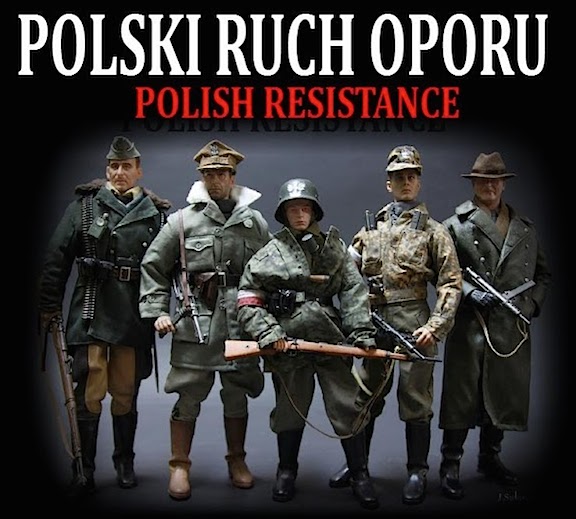 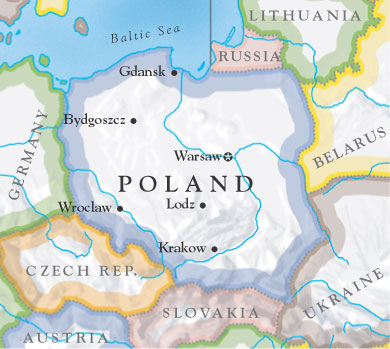 Playing at 1:6 Scale—Reenacting at 1:1 Scale

As we arrive at the end of GIjOE’s 50th Anniversary year, it seems appropriate to discuss a place where the emergence of 1:6 scale action figure collecting has only recently begun. While much of the free world has enjoyed 12-inch figure collecting for 50 years now, there are STILL places where our beloved hobby is relatively new. Indeed, when we think of countries that are “hotbeds of collecting” for GIjOE, Action Man, Dragon and other 1:6 scale action figures, what’s the first place that comes to mind? That’s right—NOT Poland. But it may surprise you to learn that Poland DOES boast a growing number of 1:6 collectors and fans within its ancient borders and that their new collections are growing with the gusto of a barbecued kiełbasa!

One of the greatest things about action figures in other countries is that their owners often create subjects we’ve never seen before or would have otherwise. Take a look at this SUPERB group of WWII Polish Commandos kit-bashed by Jacek Sulowski. Out-STANDING! (Photo: Jacek Sulowski)

Equally surprising, many of these new Polish “1:6ers” are also interested in collecting 1:1 scale militaria and in staging WWII military reenactments. That’s right. Despite (or perhaps, because of) their country’s tortured past, today’s (finally) freed Poles can now collect all the 1:6 scale “war toys” they desire, as well as participate openly in historic WWII commemorations and reenactments that portray both Allied—and Axis—military forces. Before the 1980s and the collapse of communist regimes across Europe, such actions would’ve been practically unthinkable by civilians living in Poland. But as the following two collector profiles clearly reveal—that is no longer the case.

Definition: a person who participates in reenactments of historical events

Military reenactment groups have enjoyed a long and popular history around the globe. Thousands of organizations in the U.S. reenact forces and figures involved in events such as the American Revolution, Custer’s “Last Stand” and the Civil War. Likewise, history fans in the UK regularly reenact events from the medieval days of King Arthur all the way up through WWII’s “Battle of Britain.” It’s clear that the desire to commemorate and reenact wars of the past remains strong among many around the world; not to glorify the horrific events that occurred, surely not, but rather to demonstrate the historic uniforms and types of equipment and weaponry used at the time. And that in itself is a GOOD thing; because as we know:

“Those who cannot remember the past—
are condemned to repeat it.” —George Santayana

Alone in the face of adversity, leaders of 1989’s Solidarity movement in Poland evoked imagery from the iconic American western, “High Noon,” for this poster supporting their cause of freedom. (Photo: Wikipedia)

Collecting 1:6 Scale in Poland
—A Tale of Two Citizens

If you know anything about the history of Poland, you know that it’s a very OLD country (est. 966 AD) and its people have struggled through centuries of hardship to get to where they are now—FREE. Only after the rise of the Solidarity labor movement in the 1980s, the subsequent fall of socialist regimes across Europe and their painful transition to a free market economy, have the Poles been able to experience the simple and innocent pleasures of the 1:6 scale action figure hobby. So, with 2015 just around the corner, we thought we’d offer the following inspiring profiles of two Polish 1:6 collectors, starting with Jacek Sulowski:

“Hello from Krakow (Cracow), Poland! This is where I was born in 1960, where I live and work, as well as customize and collect 1/6th scale soldier figures. Poland is one of the fastest-growing countries in Europe, not only in terms of economic development, but also constantly improving living standards and quality of life. I know what I am saying, as I have witnessed it for over 50 years now. 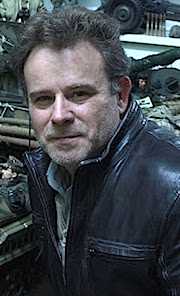 Krakow is the second largest city in Poland, with a population of more than 750,000. On the one hand, Krakow is a historic city, Poland’s former capital full of fantastic historic sites, the 11th-century Wawel Royal Castle among others, a cultural centre and a university town, with numerous colleges and universities, including the 650-year-old Jagiellonian University. On the other hand, Krakow is a modern city, where Shared Services Centres (SSCs) of global corporations are located, where important sports events are held, where you can enjoy yourself at countless pubs, clubs, restaurants and where you can also find…

My action figure collection which I show and store and in white IKEA bookcases and glass display cases in one of the rooms at the electrical equipment repair and service facility business I run together with my brother-in-law. My collection consists of 300 figures, which is quite a feat, I guess, given the year I started to build it (2009). Most of my figures were built with my own hands, customizing and kitbashing, not by buying ready-made figures. In fact, there are only 6 straight out of the box figures in my collection!” 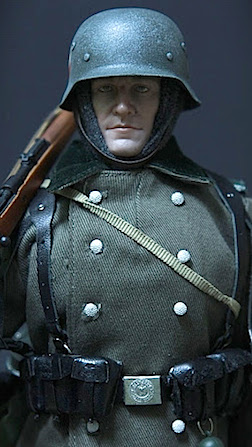 Achtung! As this closeup of one of Jacek’s Wehrmacht soldiers reveals, all of his figure’s feature realistic features and superb attention to detail. (Photo: Jacek Sulowski)

“The idea of figure customizing evolved naturally from my previous hobby; I had built 1/35th, 1/16th and 1/9th scale models earlier. Yet, I found that one-sixth scale provides almost unlimited opportunities for detail modeling. This is what I do: The WWII soldier figures I create represent all units and formations of the Allied and Axis troops. They are replica soldiers with uniforms, weapons, accessories and vehicles, exact copies of what I find in WWII photos and films. My collection changes and develops on a constant basis, as I improve, correct and enhance the figures.

I had to part from my collection for 3 months this year as it was shown from July to September at an exhibition called the “Soldier Figure Gallery,” held at the renowned Museum of Polish Armed Forces in Kołobrzeg (HERE). As many as 200 of my figures sat proudly in custom-made showcases, extolled – as I have been told – by visitors and receiving favourable reviews in the local media. Some 50 figures and one model vehicle were then relocated to another exhibition staged at the Museum, ‘The History of Camouflage.’ I hope to have those back in April 2015.”

Gott im Himmel! Keen-eyed WWII buffs should be able to point out members of Germany’s SS, Wehrmacht, Kreigsmarine and many others in this superb group of Sulowski’s custom action figures. Jacek’s skills as a 1:6 modeler are apparent in every figure. (Photo: Jacek Sulowski) Click to enlarge.

Right off the bat, we noticed that Sulowski’s photos appeared to be VERY professional and seemed far superior to the typical “home-grown” photography we’re accustomed to seeing. We asked what specific equipment or techniques he might be employing, and Jacek replied:

“All the photos are taken by me, as part of my love of 1/6th scale figure kitbashing. Photography is actually my second hobby. I take photos at the same place at which the collection is displayed with a Canon EOS 500D camera using standard lenses, in quite a ‘primitive’ way, I must say.

What I need are two boards covered with black-painted bristol paper; one to put the figures on and the other to form a background for them. There are ordinary strip lights in the room and so I use PhotoScape software and an IrfanView image viewer and converter. If you like my photos, you may also visit my galleries HERE.”

Sulowski’s skills as a customizer are apparent in his 1:6 vehicles as well. (Photo: Jacek Sulowski)

Soviet Snow Power! Sulowski’s use of dark paper backgrounds is evident in this picture and helps his all-white Aerosan and WWII snow troopers really stand out. WOW! (Photo: Jacek Sulowski)

Typical of “Joe Rooms” seen elsewhere around the world, Sulowski also utilizes wooden and glass display cabinets and shelves. Look at the size of that Russian Aerosan up on top of the cabinet. WOW! (Photo: Jacek Sulowski)

As the photos above clearly show, 1:1 scale reenacting and 1:6 scale customizing and collecting are all alive and well in 2014 Poland. It’s exciting to watch as formerly repressed countries begin to enjoy the fun and pleasures of some of the world’s greatest hobbies. But the following question always remains: After you’ve amassed a sizable collection (of anything), what do you do with it all? We were especially curious as to how new collectors in Poland were choosing to display their 1:6 scale collections and asked Jacek if he’d send in some photos of his own “Joe Room” in Krakow. He replied:

“I am happy you like my collection. I would like to submit my own collection and be the first collector from Poland to do so and thus, to share it with the other fans around the world.” —Jacek Sulowski, Poland 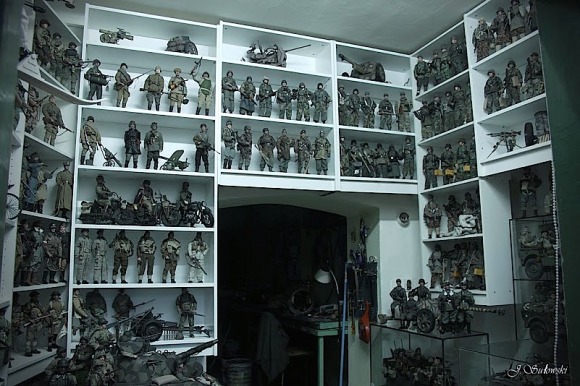 When space is at a premium, simply go “up and over” as Sulowski has done here, mounting floor-to-ceiling shelves that even go above the arched doorway. (Photo: Jacek Sulowski) Click to enlarge.

For our second Polish collector profile, we return to  Grzegorz (Greg) Borecki, who, as you’ll recall, also enjoys 1:1 scale WWII reenacting. Borecki wrote in recently and revealed the following:

Remembering the Past— Borecki in a fully restored U.S. Army Jeep in the UK. (Photo: Grzegorz Borecki)

“I’m 46 years old and of Polish nationality. In 2005, I started my adventure with WWII reenactment and I’m still a member of Stowarzyszenie Historyczne Prusy (Historical Association “Prussia”) in Poland. In 2006, I moved to the UK and since that time I’ve become a permanent resident, both living and working there.

I’ve always been interested in the history of WWII. As far back as 1990, I began making models in 1/72 and 1/35 scale, and am most interested in German vehicles and tanks. Here in the UK, I’m also devoted to a new passion: kitbashing and collecting 1:6 scale action figures (see photos). At the moment, I own 49 figures depicting German soldiers from WWII. My favorite formations are Luftwaffe (especially Air Force Ground Units) so 2/5 of my collection shows soldiers of those units. Because I still feel strong relations to Poland, I would like to ask you if I could also represent my country on your website, GIjOE Collections. Many thanks!” 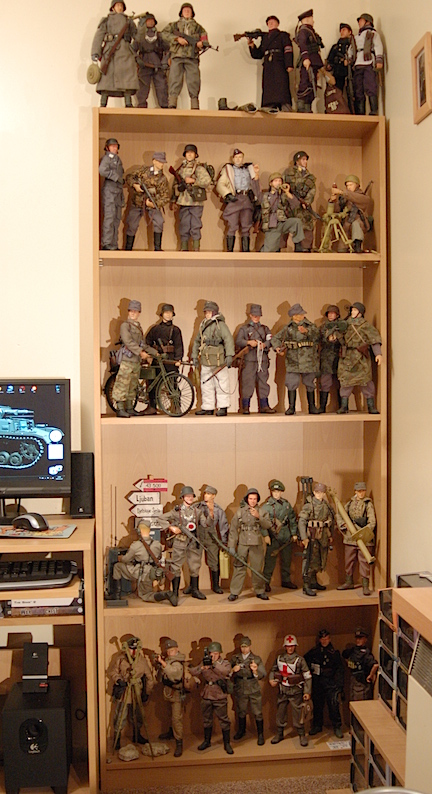 Move up even closer to can see every figure is authentically detailed. (Photo: Grzegorz Borecki) 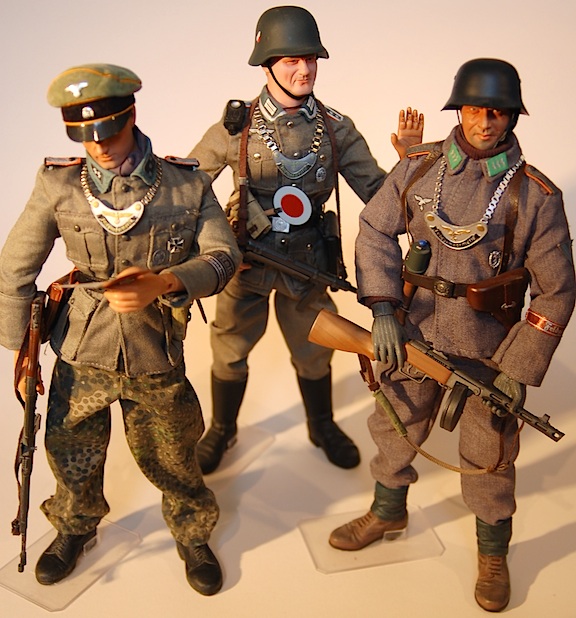 Greg’s 1:6 collection is top-notch and growing fast, but we wondered about his other hobby, 1:1 scale reenacting. Had he ever inadvertently or unknowingly offended anyone while portraying a member of WWII’s Luftwaffe? Even 70 years later, the memories of that terrible time remain fresh in many people’s minds. It’s easy to imagine tears flowing during WWII reenactments. Borecki said:

“We’ve not experienced any bad behaviours or reactions. There are so many living history groups in Poland that portray the German Army, including Waffen SS (which personally, I don’t like). I’ve heard that (sometimes) there are some awkward situations but this is very rare. When Polish combatants are amongst the spectators, after the show they’re sometimes coming over to reenactors portraying ‘Germans’ and shake their hands. Our particular association presents the Polish Army during 1939 and Polish Resistance fighters as well. In fact, very small group of people show Soviets Red Army. If you’d like to see more photos of past reenactments, please check HERE.”

Bottom Line: It’s exciting to witness the emerging freedoms of the people of Poland and to learn that they are now able to collect, customize and PLAY with 1:6 scale action figures along with the rest of the free world. The amazing collections of Jacek Sulowski and Grzegorz Borecki are two timely reminders that a wonderful new era of 1:6 fandom has begun to sweep through their once oppressed nation. We wish both men all the best in all of their future endeavors. Go, POLAND!