Sometimes the simplest ways are the most effective, as this bold sign taped to the side of a member’s SUV clearly shows. Good thinking! (Photo: DFW GIjOE Collector’s Club)

Occasionally, our ever-expanding pool of intrepid “Field Reporters” makes our work here at The Joe Report all too easy. In this particular case, “Mighty” Michael Milstead of the DFW GIjOE Collector’s Club provided us not only with great photos, but also an extensive, well-written review of the recent GIjOE show held in the Dallas-Ft. Worth “Metroplex” area. Milstead’s insightful, first-person account reveals intriguing details that we could have never have provided without his assistance. Here then, is his report…

“The DFW GI Joe and Action Figure Show was long overdue. I note that because the DFW GI Joe Collectors Club finally stepped out of the shadow of simply sponsoring numerous annual conventions and instead hosted a convention all our own. What a whirlwind of activity these past months of planning and advertising have been. Whew!”

In a scene all too familiar to attendees of GIjOE shows and conventions, fans must wait patiently outside the venue before the doors are finally opened. (Photo: DFW GIjOE Collector’s Club)

“This inaugural convention was held on Saturday October 6th in Carrollton, Texas at the First Christian Church of Carrollton. The doors opened early Saturday morning to a day that promised to be both cold and gray with threatening skies. Thankfully the forecasted rain held off, and as promised, Joe and his action figure friends were out in full force to spend their Saturday pass at the show.”

Fans also had the opportunity to join the ever-growing ranks of the DFW club. Just step right up and “enlist.” It’s as easy as that! (Photo: DFW GIjOE Collector’s Club)

“The show itself consisted of more than 18 dealer’s featuring items from every era since Joe’s inception in the mid 1960’s. If Joe wasn’t your “thing” he was kind enough to bring his brethren with him as every major and minor category of 12” and 3 3/4” figure were present. Whether it was a 1/18th scale aircraft carrier or a 1/6th scale Jeep you could find it at this show, and if you couldn’t, then you probably didn’t need it!”

Whether you’re a fan of the big or little Joes, any sighting of the ultra-rare USS Flagg aircraft carrier will get your heart-a-racing. This one came with the even rarer original BOX!
(Photo: DFW GIjOE Collector’s Club)

“I know for a fact that hundreds of Joe’s, assorted action figures, and vehicles found new homes as I watched attendees carry them out by the literal arm loads. In one particular case it took a dolly to get the ENORMOUS boxed GI Joe Defiant out the front doors!” 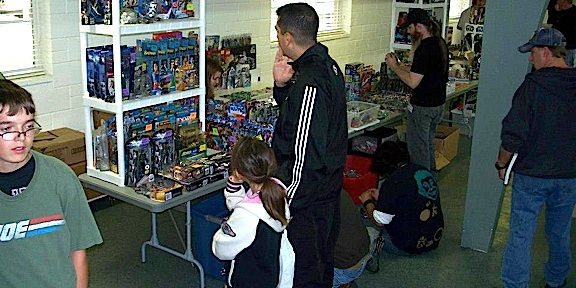 Fans of all ages were thrilled to see so many cool items for sale at the show. The only problem they had was in deciding WHAT to buy without blowing their “Joe budget!” (Photo: DFW GIjOE Collector’s Club)

“The DFW GI Joe and Action Figure Show was a HUGE success. I would like to thank all of you that attended and supported our very first show. I also want to thank all of the vendors that participated in the show as well as the members of the club for which none of this would have been possible.” 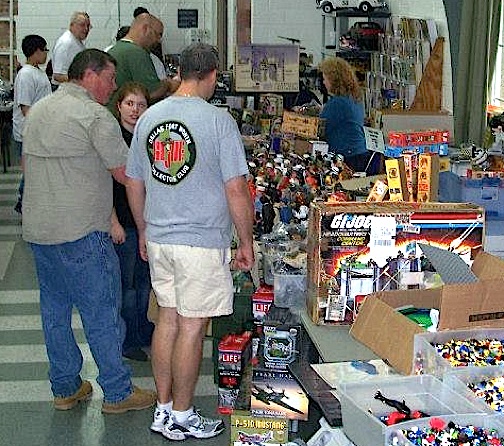 Club member’s stood out with their bold, graphic, club T-shirts. Imagine walking around in one of these. That’s a great way to get the “message” of GIjOE out! Other clubs, take notice. This is how it’s done! (Photo: DFW GIjOE Collector’s Club)

“Over the past few days I have read numerous posts pertaining to feedback concerning the show and all of them have been extremely positive. If you missed this year’s show you missed an excellent one! I have it on good authority, and you’re reading it here first, that the DFW GI Joe and Action Figure Show will return bigger and better in 2013. Thank you all again for your support!” —Michael L. Milstead

Superb work, Michael. You thanked us for our support, and we thank YOU for your report! But that’s not all, Joeheads! In another informative account of the day’s proceedings, ace field reporter Keith Holmes provides us with these additional insights…

“It might appear egotistical of me to declare the show a success, but, if you look at the scope of what we were trying to accomplish, you can see why I think it was a success:

1. Have a show sponsored by the DFW GI Joe Collectors Club in 2012. We did this within 3 months with a zero budget!

3. Raise funds to pay the church for the use of the building. We met our goal and paid in full!

In just this one shot, you can see TONS of great stuff. There’s some artillery pieces, an MSV, a Training Tower and much more. Mamasita! (Photo: DFW GIjOE Collector’s Club)

“I felt that this last goal was one of the most important. Having attended many shows over the years, I’ve noticed that it takes only one bad show to scare dealers off for the next couple of years.We tried our absolute best to minimize risk and costs to the dealers.

I’ll be following up with the dealers here shortly on what they liked about the show and what they didn’t. There were a few dealers that I didn’t talk to and would like to get their feedback on the show.

It’ll be several months before location and dates are established and locked in for 2013 show. We’ll do our best to incorporate the best features of our original location and expand those things that will make the show even more enjoyable next year. We look forward to seeing you again next year!”—Keith Holmes 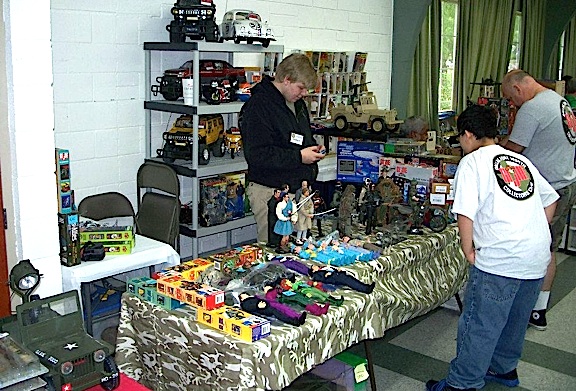 Man-o-man! Fans had so much great stuff to choose from! There’s a minty-fresh 5-Star Jeep, some High Altitude Infiltrators, a 1:6 Hummer and a Love Bug Beetle, the list of “Joe-goodies” goes on and on. Look at all that great stuff! (Photo: DFW GIjOE Collector’s Club)

Sounds like everyone had a great time and the DFW club has garnered some very valuable show-hosting experience. We can’t wait to hear what their plans are for 2013. Congratulations, DFW Club members on a job VERY well done!